Having experienced the trauma of (blog) birth in my first post and discussed childhood aspirations in my second, it is only fitting that my third post address the next stage in the growing process. And would you believe it, I’ve got the perfect excuse to do so.

You see, I’ve been asked to speak to a group of local high school students about my job, as part of a careers initiative aimed at young people who are graduating from high school this June. Ever since I received the invitation last week, I have been lying awake nights thinking about what exactly I want to communicate to these young people.

This is no trifling matter. After all, I’m sure we all remember the moment when we (or our parents) asked the question: “What do you want to do with your life?” (I’ll spare you the gratuitous musical reference this time). I, for one, was so at a loss for a vocation as a teenager that at one point, I even considered becoming an actuary, simply because it was the first entry on an alphabetical list of careers that my school counsellor handed out. Really. 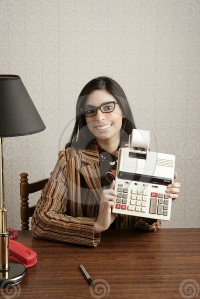 Now they’re going to accuse me of accountant-bashing

Anyway, all that nocturnal ruminating has led me to an answer to this all-important question, at least when it comes to conference interpreting. In my talk with these kids, I will tell them what interpreters do, how to become one if they decide it’s for them, maybe even do some memory games and consecutive exercises (this is going to be fun!) … But if there is one message that I want these 16-year-old kids to take home , it is this: “Take your time deciding if you want to be an interpreter. There’s no rush!”

It’s true. Since interpreting is best taught at the post-graduate level (consult the full list of AIIC’s best practices for training courses here), there is no need for these high school students to decide now whether they want to become interpreters or not.

When I made this point at a public talk recently, one member of the audience commented that he had always been told that languages should be learned as early in life as possible, and that what I was saying appeared to contradict this. I explained to him that the two claims aren’t at all contradictory. Languages are indeed best learned when you’re young – as anybody who’s ever tried to learn one can confirm – but interpreting skills are an entirely different matter. And anyway, interpreting degrees aren’t about learning languages. By the time students enter into a post-graduate interpreter training program, they are expected to already possess the language skills required for getting through the course (more on language skills and admission requirements in future posts).

Back to our high school students now: if they really are thinking about pursuing conference interpreting as a career, they will probably be happy to know that they should feel free to study whatever undergraduate degree strikes their fancy. You like politics? Fine, do that. Medicine, engineering? That’s okay, too. Theoretical physics, comparative linguistics? Sure, why not?

I would go even further and argue that, in addition to the necessary academic training, a wide range of life experiences will add to students’ chances of success when they ultimately decide to tackle conference interpreting. For instance, time spent living and working abroad will improve their ability to speak foreign languages and expose them to other cultures, while at the same time helping them acquire valuable life and coping skills that will serve them well when the going gets tough on the interpreting course (again, more on that in upcoming posts). Specialised training, internships and job experience can also add to the mix.

This is a great message for young people . They can feel free to pursue their interests while keeping the door to conference interpreting wide open. In fact, the expertise they acquire in other fields is bound to serve them well when they actually hit the interpreting market and are trying to stand out from the crowd (what medical congress organizer doesn’t want to hire a qualified interpreter who also happens to have a medical degree?).

Now, all this might seem so self-evident that you may wonder why I would dedicate an entire post to it. But I can’t tell you how many times I get interpreting students coming in from other fields who feel like they have to apologise for not having studied languages. Like being a mechanical engineer or a molecular biologist is a bad thing? Or older students (by “older” I mean, say, over the ripe old age of 27) who think they have a competitive disadvantage, because at that age, they’re “over the hill”. How thrilled these students are when I tell them that their outside experience and “advanced age” are actually plus points for them!

Now before anyone starts accusing me of making wild, uncorroborated claims, I’d argue that the circumstantial evidence bears me out. When I look at the 180-odd students I’ve worked with over the past 10 years, the ones I recall having passed with the most ease and who reached their professional goals most quickly are the ones who meet the above description. And anyway, the guidance provided by AIIC backs me up on this.

Of course, there have also been a handful of “child prodigies” who whizzed through the course at the tender age of 22 and went to work for the international institutions or on the private market straight after graduation. But generally speaking, the results I see, year on year, are the ones that confirm my message for today’s post: “take your time!”

So, now that I know what I will say when I stand up in front of those teenagers in a couple of weeks, I hope I will finally get a good night’s sleep – at least until it’s time to write my next blog post, that is …

10 thoughts on “Interpreting: The Formative Years”